Brittle But Not Broken

Osteogenesis Imperfecta (OI), more commonly known as brittle bone disease, affects approximately 1 in 15,000 people.  A genetic disorder whose impact on the bones can range from mild to severe and is caused by defective genes which compromise how the body makes collagen.  Collagen is a protein that helps to strengthen bones.  Subsequently, a person diagnosed with OI can experience hundreds of bone fractures for no apparent reason.  An OI diagnosis would seem daunting at the very least now try to imagine living life in such a delicate state.   Well, no need to imagine because we met Kaustuv Dasgupta who cleared up any questions one might have on how to life a happy, productive and fulfilling life with OI.

Sai Kaustuv Dasgupta was born in Siliguri, India on October 6, 1991 and currently lives in Andhra Pradesh, India which is where he has lived for the past 14 years.   In his early childhood he travelled to many places within India but on every outing his parents had to pay extra attention to him because his bones were as fragile as glass.  From the time he was a young child he had to exercise extra caution about his movements and was unable to play with his friends because his health never permitted it.  Kaustuv’s nickname is Sai.  He added the prefix to his name to make it more meaningful and energetic.  Sai tells us that “I was never encouraged to come out of a safety zone and lead a normal life.  I was different and they made me realize this very well.“

At the age of 26, Sai realized that his disability could not defeat him and he now has the courage to speak boldly with people and answer any questions they may have about his condition.  He confidently shares with others that he is fully fit and confidently lives his life with positivity which he feels is the only way to celebrate his much cherished life.

Sai says “Being unable to do all the regular works, I have taught myself to do such works, which all able bodies are not able to do. So slowly people started believing that positivity doesn’t need any medium to enhance, its huge in itself.  My positivity made me today what I am.“

Moving toward his goal to be independent and to repay his parents for their sacrifice and dedication, Sai works as a graphic designer.  He knows he can never repay them so he is determined to serve them with his skills. 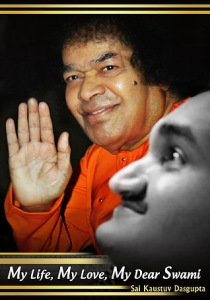 It gives him immense satisfaction to see the smiles on the faces of the people he designs for.  He designs by operating a mouse with two fingers on his left hand (which is the only hand he has use of).  He holds the mouse with his thumb and clicks with the index finger.  His hands can’t reach the keyboard but he types quite fast by using a virtual keyboard.   He discovered that the virtual keyboard is a common feature in every computer system but no one uses it because they don’t need it or are simply unaware of it.  Sai is also a published author and for his writing needs, the virtual keyboard is his only option.   He successfully authored “My Life, My Love, My Dear Swami” within a  period of two months.

Sai has broken new barriers and entered into National, Asian & World Records for Fastest Typing Speed (28 words in 52 Seconds) with one finger of left hand.

In addition to being a graphic designer and author, Sai is also a happiness coach, motivational speaker  and entrepreneur.  He has started Happiness Unlimited with a mission to bring back purity of heart and genuine happiness; two things people have lost in today’s course of life.  Happiness Unlimited spreads a positive vibe to all who are aspiring to achieve success with a can-do attitude.

As if that is not enough to keep any one person busy, Sai is also a singer and composer.  Check out his YouTube channel (link provided below).

At present, Sai is actively researching how to improve accessibility in India, with a focus on accessible travel.  He wants to put an end to the types of problems he faced during his trips to Goa, Chennai and Bangalore by working with concerned authorities.  He  spreads the light of hope to all those who have confined themselves due to a lack of accessibility.

Sai lives a very busy and complete life.  He is brittle but in no way is he broken!

2 Comments on “Brittle But Not Broken”